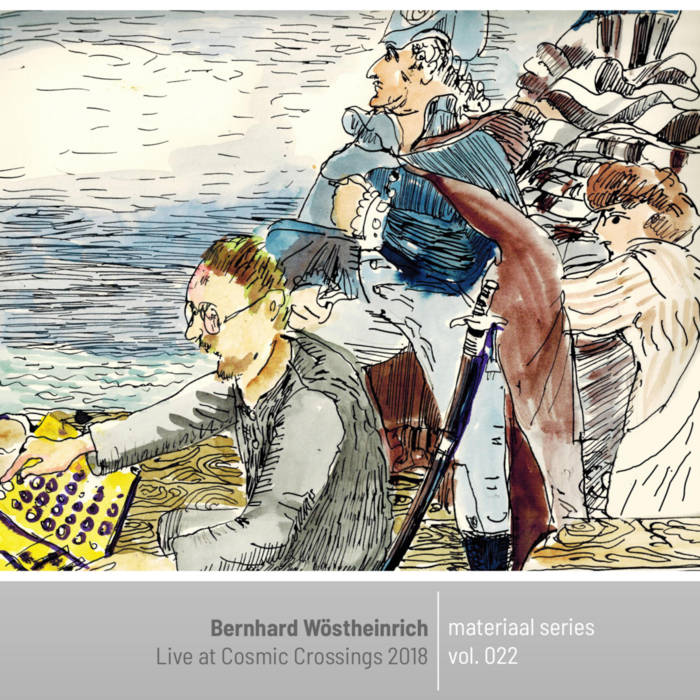 Jim Conyers Bit of a weird one this... There's kind of a recurring glitch, like the music suddenly skips forward mid note for no reason - sort of musical memory loss. Good though!

Composed, programmed, and recorded in real-time by a crazy mind and his laptop. No prepared sequences, patterns, or melodies used.

The Cosmic Crossings concerts are a series of electronic music events held at the Unitarian Universalist Church at Washington Crossing (aka UUCWC) Each concert showcases live performances by electronic musicians and bands from all over the world, playing ambient, experimental, and space music, accompanied by unique lighting and multimedia visual effects.

"I distinctly remember that moment of realization – as Bernhard set up his minimalist music rig on our stage (just 2 synths, a laptop and a grid controller) – that he was planning to sit himself right on the floor... something we hadn't seen at a Cosmic Crossings concert before. At first, I was concerned that the audience wouldn't be able to see him on stage but, as he started to play, I realized that the music itself was the more-important focus. And it was quite a musical journey! His set was rich and varied in content and style, ranging from dense and orchestral to quiet and delicate, with many small musical and rythmic accents, snippets of found sound, and interesting sonic bits that added to the overall richness of the performance. At the end, we all knew that sitting on the floor with just a few instruments within reach was the perfect way for Bernhard to present his music to us that night." - Ken Palmer; Cosmic Crossings co-founder & visualist

"Chris cross of icing - Every month Bernhard asks me to make a drawing for one of his Materiaal releases. I use the photos someone took at the gig and what I associate. This time it is the recording from Bernhard’s gig at the Unitarian Universalist Church at Washington Crossing (UUCWC) in 2018 that is going to be published. The title of the concert series is Cosmic Crossings. I was wondering what all the crossing is about and Wikipedia showed me the painting of both American and German painter Emanuel Leutze (born 1816) that I quote in my drawing. In this picture, well known in the US, there are quite a few crossings, Wahington’s armys depicted crossing of the Delaware in the American War for Independence, that in reality took place in the night from 25th to 26th december 1776 very close to the place where UUCWC is located now. The painter, whose parents had emigrated to the US when Emanuel was nine, had to cross the ocean back to Germany to study painting in Düsseldorf. Enthusiastic for freedom that Germans fought for in 48/49 he made the monumental painting in 1851 and copied it to bring it to the USA. He wanted to incite sympathy for the German struggle for freedom. But at that time the issue of slavery was more important in the United States. Finally Leutze sold the monumental painting and another 40 years later it came to the Metropolitan Museum in New York. His creator had moved back to the States in 1859.

I thought the combination of Bernhard Wöstheinrich playing music with Washington both in one boat or one one raft was just fine. A German crossing the ocean in a plane, crossing the path of a president crossing the Delaware painted by a German who crossed the ocean in a boat and a valiant church community that commemorates the fight for independence 'in a land that’s known as freedom' (Graham Nash) in its name.

Bernhard’s music consists of very free electronic improvisations, an art that invites the listeners to follow his and their own streams of music and consciousness and dream about the beauty of liberty without borders. In my drawing Washington stands behind him, looking out. There is still a lot to fight for.” - Christine Kriegerowski